Let's begin by examining Matthew 27:2. It reads, "And when they had bound Him, they led Him away, and delivered Him to Pontius Pilate the governor." Was Pilate really a governor? Luke 3:1 seems to agree: "Now in the fifteenth year of the reign of Tiberius Caesar, Pontius Pilate being governor of Judaea, and Herod being tetrarch of Galilee, and his brother Philip tetrarch of Ituraea and of the region of Trachonitis, and Lysanias the tetrarch of Abilene..." Josephus and Tacitus refer to him as "procurator." But even though Josephus and Tacitus mention Pilate in their writings, the critics wanted something more -- they wanted tangible proof documenting his life. Although, that hasn't yet happened, there are several pieces of "evidence" that can be put forth in support of Pontius Pilate's existence.


In 1961, while excavating a Roman theatre near Caesarea, Dr. Frova and some Italian archaeologists discovered a stone slab which was part of the steps of the theatre. It's inscription said that it was from "Pontius Pilate, the Prefect of Judea." It read: "Tiberium, Pontius Pilate, Prefect of Judea." Some speculate that its complete inscription may have read, "Pontius Pilate, Prefect of Judea, has dedicated to the people of Caesarea a temple in honor of Tiberius," and that it was once a part of a Tiberium (temple). According to wikipedia, "the coastal town of Caesarea... was the seat of power of Iudaea during the government of Pontius Pilate," although he did have a place of residence in Jerusalem which he seldom used. It is important to note that John's use of the word "governor" incorporates both the title of "prefect" and "procurator." 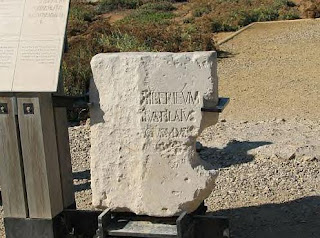 Photo by Mustardseed
Also, coins have been found that are minted in A.D. 29-31 with the name "Pontius Pilate" etched into them. It is interesting to note that Pilate was Prefect from approximately 26-36 A.D.
The critics have long pointed out that if Pilate did exist, he wouldn't have been so weak as to give in to the people's wishes and crucify Jesus. They use this to then say that the Bible is in error. However, John 19:12 Tells us that the Jews were inciting a riot, and they threatened Pilate: "And from thenceforth Pilate sought to release Him: but the Jews cried out, saying, 'If thou let this man go, thou art not Caesar's friend: whosoever maketh himself a king speaketh against Caesar.'" Pilate's actions make perfect sense, because he had been appointed by an official who was executed for plotting against Caesar. Naturally, then, Pilate wanted to keep the peace; he knew that if the Caesar in Rome heard about a riot, he would have Pilate's head.

The next verse in John 19, verse 13, states: "When Pilate therefore heard that saying, he brought Jesus forth, and sat down in the judgment seat in a place that is called the Pavement, but in the Hebrew, Gabbatha." Many critics thought that the Pavement didn't exist, so the Bible must be wrong. However, in his book "The Archeology of Palestine," William F. Albright identified it as the court of the Tower of Antonia. This was a Roman military headquarters, located in Jerusalem. It was destroyed in 66-70 A.D. It had since been buried, even though the city was rebuilt under Hadrian, and it was not discovered until recently.

Another thing to note is that Josephus, who mentions Pilate in his writings, was a Jewish historian. He would have paid much attention to the details of the history of his race, including who was reigning, because it was important. To add to this, the Bible predicted that "the Scepter shall not depart from Judah, nor a lawgiver from between his feet until Shiloh comes, and to Him shall be the obedience of the people." When the Romans overtook Jerusalem, they took away the people's right to kill as punishment -- even if it was under their own law. The only thing they were allowed to do was sentence people to death. That is why they said, "He is guilty of death," and then they had to go to Pilate to execute the plan -- they couldn't do it, and Pilate had the power.

Also, Pilate wrote various letters that have been preserved. Whether or not they are authentic, they do show that a man named Pilate existed, and they corroborate the story of Jesus as given in the Gospels on many points.

Although the last few points don't specifically "prove" that Pilate existed, it does add weight to the matter, and it shows that the Bible is accurate in even the little details. All of the points show that Pilate was a real person who did exist. Again, the critics arguments have failed in the light of the truth of God's Word.