Book Review: I Don't Have Enough Faith to Be an Atheist

August 05, 2011
My introduction to the book I Don’t Have Enough Faith to Be an Atheist by Norman Geisler and Frank Turek began when I was making a wish list of apologetics books one day. The title was very intriguing to me, especially since I have had many an encounter with atheists, and the material presented within the pages did not let me down in the least! 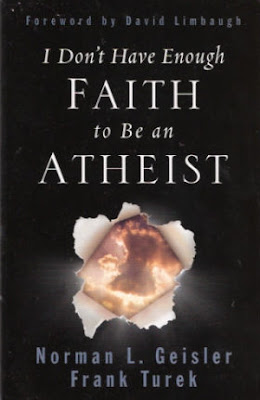 Norman Geisler describes the book as follows: “… the fact that we are Christians is not the issue; why we are Christians is the important point. And that’s the focus of this book.”
The book, which makes for a great reference tool, covers such topics as absolute truth, SURGE as proof for creation by God, naturalism, evolution, miracles, early eyewitness testimony about Jesus, Mother Theresa vs. Hitler, Top ten reasons we know the New Testament writers told the truth, the Resurrection of Jesus, Was Jesus God or just a moral teacher?, and Jesus’ teachings about the Bible. Also included are three appendixes in which you will discover the answers to the following: “If God, why evil?” “Isn’t That Just Your Interpretation?” and “Why the Jesus Seminar Doesn’t Speak for Jesus.” The first two actually portray an interesting discussion between an atheist and a Christian in order to get the point across. At the beginning of each chapter there is also an outline so that you can see where you are in the overall layout of the book and see how the information fits together. Thus, the book lays out the case for Christianity in logical order; “Each chapter builds on the previous one,” as the book says, making for a very smooth transition to each topic discussed.
The only downside I saw with the book was the use of the term “Big Bang” to describe creation by God. I understand that the author’s intention is to say, “if the Big Bang were true (as evolutionists claim), then this still points to God’s existence”; but I did think the terms should have been defined and the positions of the authors should have been more clear as it gets confusing to follow otherwise. Regardless, I really enjoyed the content of the book. My favorite sections were The Road Runner Tactic and the use of Laws of Thermodynamics as proof for a Creator of the universe; the latter section was especially helpful.
Overall, I found this book to be a great reference source for anyone who has an interest in apologetics, and an engaging tool for those who have skeptical friends or family. I particularly loved the quotes at the beginning of each chapter; and unlike other apologetics books, this one kept my interest throughout. It also proved to be helpful in my dealings with atheists. I highly recommend this great work.
absolutes apologetics creation evolution God's existence reviews