September 01, 2012
When I first heard that October Baby was coming to theaters, I knew it was a movie that I had to see. But if you’re like me, and were unable to make it to the theater to see it, you will be happy to know that release date for the DVD is September 11. Recently, I finally had the chance to watch this highly anticipated film, and here are my thoughts… 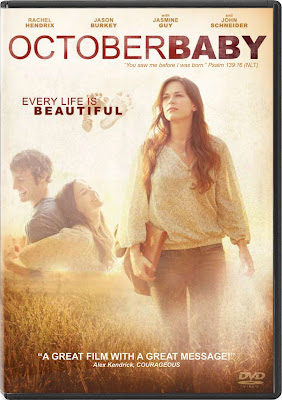 The story behind October Baby is loosely based on the true story of abortion survivor Gianna Jessen. It is the story of nineteen-year-old Hannah Lawson who finds out that her personal struggles and physical sickness are the result of being an abortion survivor.


Here is the film’s synopsis:

As the curtain rises, Hannah hesitantly steps onto the stage for her theatrical debut in college. Yet before she can utter her first lines, Hannah—unscripted—collapses in front of the stunned audience.

After countless medical tests, all signs point to one underlying factor: Hannah's difficult birth. This revelation is nothing compared to what she then learns from her parents: she was actually adopted … after a failed abortion attempt.

Bewildered, angered, and confused, Hannah turns for support to Jason, her oldest friend. Encouraged by his adventurous spirit, Hannah joins his group of friends on a Spring Break road trip, embarking on a journey to discover her hidden past … and find hope for her unknown future.

In the midst of her incredible journey, Hannah finds that life can be so much more than what you have planned.

I had heard Gianna Jessen’s testimony before, so I was very excited to see this movie; but I wasn’t sure exactly how it was going to be portrayed… Usually, with a topic like this, one expects some sensitive or objectionable content. However, I love how the film tackles such an important, yet sensitive topic so effectively. The issue of how abortion affects survivors – and those who have had abortions – was excellently depicted. My favorite portion of the scene was when Hannah visits the nurse that helped to perform her failed abortion (played by Jasmine Guy). I won’t spoil it, but let’s just say that it really added a depth to the film that will definitely have an impact on anyone who watches it.

The actors were great as well; each fit his character perfectly. Actors include American Idol finalist Chris Sligh – who does a good job of portraying the misfit Bigmac who won’t reveal his real name; famous actor John Schneider and actress Jasmine Guy; newcomer and main actress Rachel Hendrix, who plays the role of Hannah; and Jason Burkey. Robert Amaya, known as the “Snake King” on the movie Courageous, also makes a brief appearance. Each actor had something to add to the movie, making it a real success.

The movie has a very emotional element to it. When you consider the sensitive topic at hand (abortion), much of the film is sad; you will want to have plenty of tissues handy, because this film will make you cry. There is no objectionable content (though there is one scene at the beginning depicting a seizure that parents of young children may want to avoid), but from the moment that Hannah finds out that she was adopted and was a victim of a failed abortion, the movie follows her journey of internal struggles; you can imagine how heartbreaking that would be. Even so, I loved the fact that there was a lot of humor sprinkled throughout October Baby; there were parts where I actually rewound the DVD so I could hear that funny punch line again! Each actor very well portrayed the emotions, as well – and most of the time it was the expressions on their faces that said it all.

One of my favorite things about any DVD is the extra features, and I loved the extra features on October Baby. The “key scene” in the deleted scenes would have been worth keeping, in my opinion, since it highlights why Alanna – Jason’s supposed girlfriend – is so uptight around Hannah; I thought it would have made a nice addition to the film, but it was good without it as well. I was also delighted to see that the “Every life is Beautiful” segment featured Ken Bevel who has acted in several Sherwood Pictures films. Alex and Stephen Kendrick – directors of Sherwood Pictures – also give some thoughts on the movie in a segment called “Singing the Praises of October Baby.” (Incidentally, the Kendricks helped add some ideas to perfect the film while it was in the making.) As a Christian music fan, I also enjoyed the interviews with Casting Crowns, and Francesca Battistelli, which were included in that segment. Additionally, The Afters wrote the main song for October Baby titled “Life Is Beautiful,” and there is a music video which depicts scenes from the movie in the extra features. Another music piece by Gianna Jessen, the abortion survivor on which the story was based, is also featured in the film; and there are several extra features in which she shares some of her thoughts on the movie.

Overall, I loved October Baby. It is a great film with a great message, told in a unique way. It doesn’t condemn abortion clinic workers nor does it condemn those who have had an abortion. It takes a powerful approach at addressing the effects of abortion on both abortion survivors and post-abortive women – it is a “coming-of-age love story” about Hannah, an abortion survivor, and her many internal and physical struggles, as a result of a failed abortion. It also portrays her quest to find her birth mother, while demonstrating the power of forgiveness; and in this way it is very effective at tackling such a sensitive, yet pertinent topic to today’s society. I highly recommend this excellent film!