Reasoning with the Jehovah's Witnesses

April 11, 2011
Below is an article on Jehovah's Witnesses based on Ron Rhodes' book, Reasoning from the Scriptures with the Jehovah's Witnesses. All quotations are from that book unless otherwise noted. This article is in conjunction with the DCF blog's comparative religions series. If you have any questions, please feel free to comment or email me. 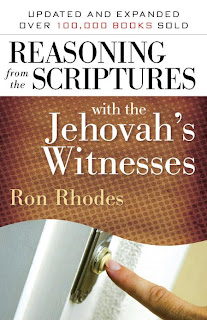